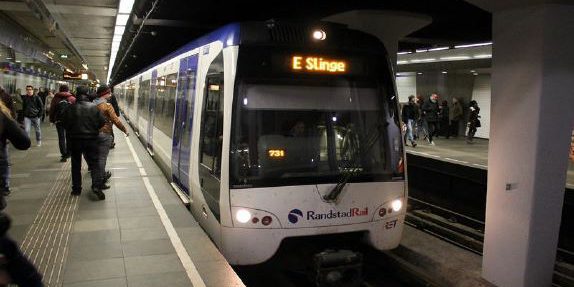 Work has begun on renewing the square (Stationsplein) in front of the Hollands Spoor train station. As a result of the project the tram stops will temporarily not be in use as of 1 July and the trams will be diverted. To make it easier for you, you can download the ‘Rondom Hollands Spoor’ app with the latest information about the project.

The first phase of the project is to modernise the sewer pipes. The following phase will be to replace the tram rails, build the tram stops with a rooftop and to carry out a new design for the Stationsplein. This will be a major project and trams will therefore be diverted for a long period.

The contractors, HTM, NS and the municipality will do everything they can to limit the inconvenience as much as possible.

The trams will not operate on the Stationsplein from 1 July to 18 December. The buses will also have other stops: WALKING ROUTES VIA THE APP

All routes can be found in the ‘Rondom Hollands Spoor’ app. Download this app in the Apple App Store or the Google Play Store or view the app online. The app can be downloaded using QR codes which you can find around The Hague’s Hollands Spoor station.

Look for more information on the project under Ontwikkelingen rond Hollands Spoor.