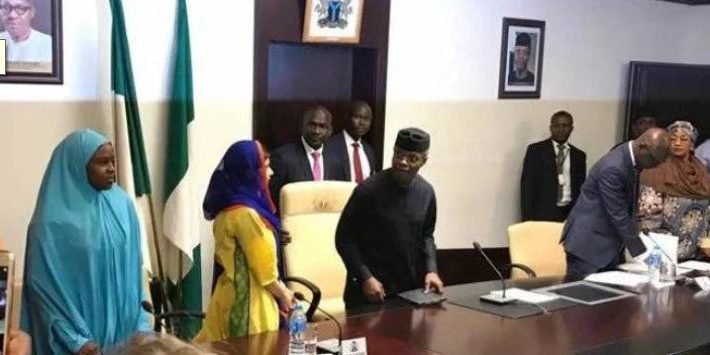 The acting President Yemi Osinbajo received Malala Yusafzai and her delegate in Aso Rock before proceeding to a closed-door session – Malala had visited former President Goodluck Jonathan in 2014 after the abduction of the Chibok girls. Malala Yousafzai, the internationally acclaimed rights activist and founder of the Malala Funds and girls’ education, visited Acting President Yemi Osinbajo in Abuja on Monday, July 17, 2017.

This visit is coming over two years after the young Malala Yousafzai paid a similar visit to former President Goodluck Jonathan over the detained Chibok girls. Reports say she asked the federal government to declare a state of emergency in the education sector of Nigeria.

Channels Television reports that the Pakistani schoolgirl, who survived a Taliban attack and decided to become an activist, met Osinbajo at the State House, Abuja. Osinbajo receiving Malala in Aso Rock. Credit: Channels Television Her meeting with Osinbajo, the report stated, was part of the activities to mark her visit to Nigeria.

Malala, the youngest Nobel Prize laureate led a delegation of seven people and spoke on her zeal to end the resentment of girl-child education in some areas of the world. NAIJ.com learnt that among the delegates was Malala’s father. The meeting with Osinbajo reportedly commenced at 6:00 pm. The closed-door meeting was ongoing at the time of this report.

A year before Nigerians elected Muhammadu Buhari as president, Malala had visited Goodluck Jonathan shortly after Boko Haram abducted over 200 school children in Chibok, Borno state. She also supported protests and pressures on the government to ensure the safe return of the girls to their parents.

Malala also announced a donation of $200,000 from her foundation to support education in Nigeria when she visited the country then. When Malala turned 18, She was reported saying: “I am turning 18 on the 12th of July and my life of being a child will come to an end. “But there is something that I have learnt from being a child that I will never forget and would carry on even in my adulthood that is to dream. In fact, to dream big without limit.